7:23 Furthermore, the former priests were many in number, because they were prevented by death from continuing in office;

7:24 but he holds his priesthood permanently, because he continues forever.

7:25 Consequently he is able for all time to save those who approach God through him, since he always lives to make intercession for them.

7:26 For it was fitting that we should have such a high priest, holy, blameless, undefiled, separated from sinners, and exalted above the heavens.

7:27 Unlike the other high priests, he has no need to offer sacrifices day after day, first for his own sins, and then for those of the people; this he did once for all when he offered himself.

7:28 For the law appoints as high priests those who are subject to weakness, but the word of the oath, which came later than the law, appoints a Son who has been made perfect forever.

Mark 10:46-52
10:46 They came to Jericho. As he and his disciples and a large crowd were leaving Jericho, Bartimaeus son of Timaeus, a blind beggar, was sitting by the roadside.

10:47 When he heard that it was Jesus of Nazareth, he began to shout out and say, “Jesus, Son of David, have mercy on me!”

10:48 Many sternly ordered him to be quiet, but he cried out even more loudly, “Son of David, have mercy on me!”

10:49 Jesus stood still and said, “Call him here.” And they called the blind man, saying to him, “Take heart; get up, he is calling you.”

10:50 So throwing off his cloak, he sprang up and came to Jesus.

10:52 Jesus said to him, “Go; your faith has made you well.” Immediately he regained his sight and followed him on the way. 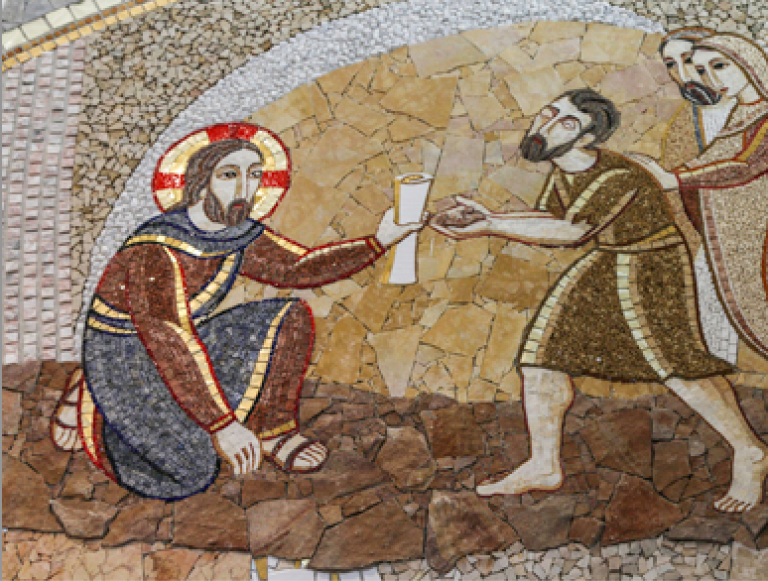